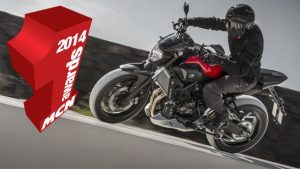 Widely recognised as the most prestigious awards in motorcycling, the 2014 MCN Awards have finally been announced with two different MT models scooping the top prize in their respective classes – with the new MT-125 voted Best 125cc machine of the year and the MT-07 declared as the winner in the Best Naked (middleweight) category, whilst also being chosen by the distinguished judges as the MCN Overall Machine of the Year 2014.

Winning any of the annual MCN awards is always an honour but to receive the top prize confirms that a new motorcycle is something rather special.

The Machine of the Year 2014 award is even more significant than normal for this affordable, twin cylinder machine, as the judges have historically tended to vote for large capacity flagship models in previous years and their choice of the MT-07 further reinforces everything that the motorcycling press has been saying this year about the MT-07, a machine that has simply redefined the middleweight market setting a new benchmark for agility, performance, reliability and value.

With BIKE magazine choosing the MT-07 as their 2014 Bike of the Year and also Britain’s Best Value Bike 2014, added to the recent Visordown web award for Best Newcomers’ Bike 2014 this latest accolade as the top MCN award winner has firmly cemented the MT-07’s place in biking history.

The award winning MT line-up has been the talk of 2014 and the stand out new model range of the year.